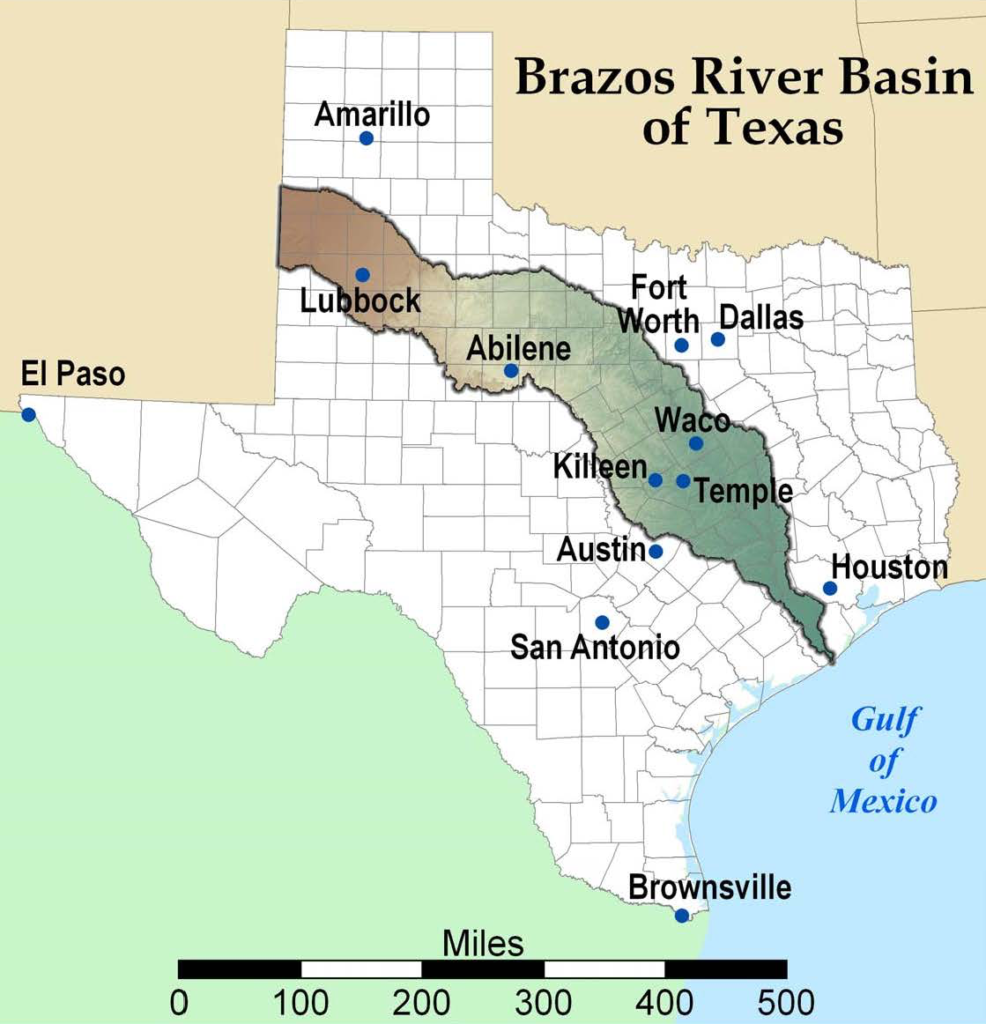 The Brazos River is the 11th longest river in the United States; its headwaters are in New Mexico, and it flows into the Gulf of Mexico. Most likely named the Tokonohono, the river was called “Rio de los Brazos de Dios” by Spanish explorers which translates to “The River of the Arms of God” in English; its modern name is simply the “Brazos River.”

The San Bernard river starts just south of New Ulm in Austin County and flows into the Texas Intercoastal Waterway (although its original outflow was in the Gulf of Mexico until it was silted in).

There are numerous creeks and streams which flow through Fort Bend County. Two of these streams have gauges on them: Big Creek and Dry Creek.

Bessies Creek, also known as Best Creek, Best’s Creek, or Besses Creek, rises 1½ miles northeast of Monaville in central Waller County and flows southeast for thirty miles, through northern Fort Bend County, to its mouth on the Brazos River, three miles south of Fulshear. It crosses an area of moderate to steep slopes surfaced by sandy loam and clay that support hardwoods and crops. The creek was probably named for Isaac Best, an early settler of Waller County.

Big Creek begins south of Rosenberg and flows southeasterly 25 miles into the Brazos River in Fort Bend County. The creek is an old Brazos River channel with associated sloughs, bayous, oxbow lakes, and coastal prairies that are bordered by bottomland hardwood forest.1 This habitat provides an excellent opportunity for bird watching, as over 270 species of birds have been sighted in this area. Birds commonly seen here include purple gallinules, least bitterns, prothonotary warblers, barred owls, white-ibis’, herons, and egrets among others. Other wildlife that inhabits the area includes alligators, bobcats, raccoons, feral hogs, and gray foxes.2 The ecologically significant segment is from the confluence with the Brazos River in Fort Bend County upstream to State Highway 36 south of Rosenberg in Fort Bend County.

Dry Creek, intermittent in its upper reaches, rises on the Brazos River just northeast of Rosenberg in central Fort Bend County and runs southeast for eleven miles to its mouth on Smithers Lake. The vegetation along its banks consists mainly of mixed hardwoods interspersed with various prairie grasses. The variable terrain is surfaced by highly impermeable soil and calcareous clay.

Keegans Bayou rises one mile south of Clodine and two miles west of the Harris county line in northeastern Fort Bend County (at 29°41′ N, 95°40′ W) and runs eleven miles east to its mouth on Bray’s Bayou, east of U.S. Highway 59 and south of downtown Houston near Brae Burn Country Club in southwestern Harris County (at 29°40′ N, 95°32′ W). The Bayou was named for James Kegans, Jr., an early settler of Texas. The creek is intermittent in its upper reaches. The surrounding flat to rolling terrain is surfaced by sandy and clay loam that originally supported mixed hardwoods and pines; the area is now residential metropolitan Houston.